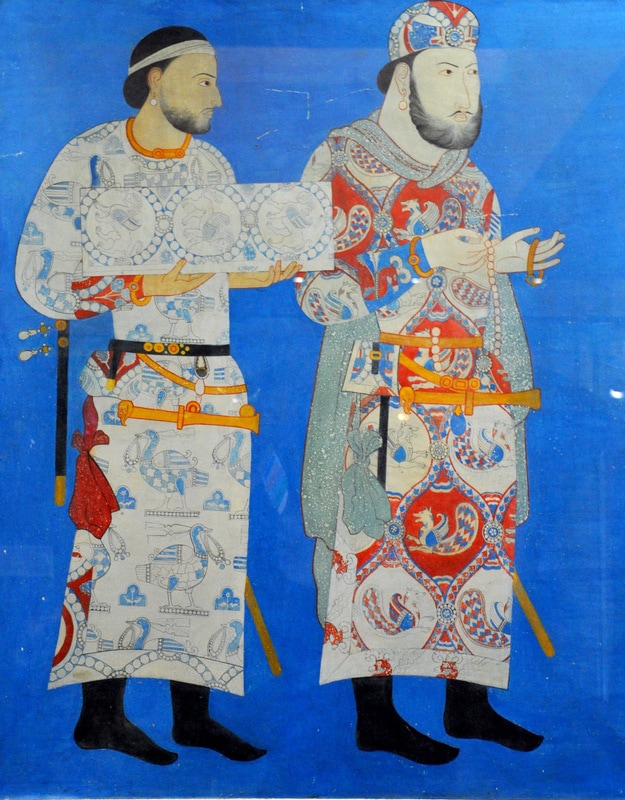 ​Fragment of wall image of ambassadors VII Cent. from Afrasiab - State Museum of History of Uzbekistan
This page is currently being researched... just a few references for the curious.
UNITED NATIONS
www.un.org/en/sections/issues-depth/peace-and-security/index.html
​http://www.un.org/en/genocideprevention/about-responsibility-to-protect.html
​Articles on diplomacy
http://www.academia.edu/11002933/The_Evolution_of_Diplomacy_From_Classical_to_Modern
https://kar.kent.ac.uk/38123/3/IPSA%20Encyp%20Diplomacy%2028%20April.pdf
​
Diplomacy in Islamic History
The Treaty of Hudaybiyyah
“After a multiple exchange of emissaries between the Makkans and Prophet Muhammad, the Makkans eventually sent Suhayl ibn ‘Amr to arrange and execute a treaty which became known as the Treaty of Hudaybiyyah, with Prophet Muhammad (pbuh). This treaty was to become, in the eyes of Muslim scholars, a model of Islamic diplomatic law and a paradigm of subsequent treaties (both domestic and international treaties) under Islamic Law. With the refusal of Suhayl to accept and give in to any concessions, coupled with the acquiescence of and leniency exhibited by Prophet Muhammad (pbuh) particularly in the face of Suhayl’s insulting posture, the peaceful negotiations still went ahead uninterrupted. The Muslims’ understanding and acceptance of the principle of diplomatic inviolability would not allow for any unpleasant reaction toward a rude diplomatic envoy.
The treaty stipulated that peace was to be maintained for ten years between the Muslims and the Makkans and that anyone from among the Quraysh who moved into the Muslims’ camp without the permission of his guardian would be returned by the Muslims. However, if a Muslim emigrated from the Muslim camp to Makkah, he would not be returned. It was also agreed that the Muslims should return to Madinah without having to perform the ‘Umrah that year, but would come as pilgrims the following year, and that they would be allowed to stay in Makkah for only three days. Also indicated in the pact was the freedom of any tribe to seek alliance with either the Makkans or the Muslims without any inhibition or intimidation…."
REF: Pages 100-101 Islamic Law and Transnational Diplomatic Law. A Quest for Complementarity in Divergent Legal Theories. Author: Ismail, Muhammad-Basheer .A.
https://books.google.com.hk/books?hl=en&lr=&id=BNP7CwAAQBAJ&oi=fnd&pg=PP1&dq=info:aEuCCenb1VIJ:scholar.google.com&ots=6u4esFMCNE&sig=huLpLJJX44tJrMS-hZHs7IQs0Fk&redir_esc=y#v=onepage&q&f=false

EDITOR'S NOTE: It may take a few months for me to research this and try to figure out how to organize it diplomatically.
In the meantime, please feel free to go to http://www.silkroadvirtualuniversity.org/peace-studies.html
and read some things about Peace Studies and conflict resolution. Who knows, it might help.